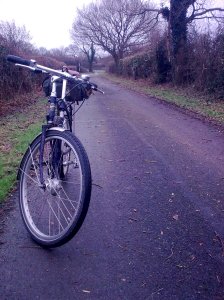 I hear it up ahead – the age-old threat
That haunts the lanes around this time of year.
For months I’m almost able to forget
That creeping sense of doom, the lurking fear
Until I see the signs left where it passed –
The shattered stems, the blasted branches, white
As clean-picked bones. And here it is at last:
Deep diesel growls as whirling steel teeth bite
And chew the hedge to splinters. Every thorn
The beast spits out across the road a baited
Trap primed to treat tough Kevlar tyres with scorn
And leave me stranded, beaten and deflated.
So while these hungry monsters snarl and stalk
I’ll ride prepared to turn around – or walk.

Seems our local farmers are obsessed with trimming their hedges. All autumn they were out there with their big mechanical flails, and now they’re at it again, leaving every lane like a bed of nails, and the dreaded P*ncture Fairy rubbing her hands with glee. It’s something to occupy the winter months, and as an erstwhile agriculturalist myself, I appreciate the husbandry benefits – but as a cyclist, I wish they’d leave the poor hedges alone for a bit!

They built it for the battlefields of France
In ‘forty-four – a paratrooper’s way
Of gaining rapid ground as the advance
Drove inland from Gold Beach that Longest Day.
Our active service won’t force us to face
The wait inside a dark Dakota till
A green light sends us roaring into space –
And time’s the only thing we’ll ever kill.
But still, we’re comrades in a long campaign
Against our cratered roads, the armoured might
Of cars, wild weather, human weakness, pain;
A just and righteous war we’re proud to fight.
Each day a small but vital victory
In life’s unending struggle to be free.

A little tribute to my faithful 1940s-replica Pashley Paramount: now the snow’s gone at last, we’re back on the road, doing battle with floods…the poor old bike certainly doesn’t look as shiny as it did when I took its picture in Brittany last summer. N.

The smiling, suited seers had long foretold
Its coming. Now the bitter wind is thick
With it, and whole lands disappear; the cold
Magician works his well-worn conjuring trick
And we are in an older Age once more;
When wolfish winter stalked us and we stood
At bay for months, dependent on our store
Of fodder, and the warmth of wool and wood.
And now it seems that Progress counts for naught.
Our wheels will not avail us; no device
Can liberate our captive country, caught
And held by one hand’s-breadth of hard-packed ice.
For all our cleverness, we’ve been undone.
We’ll go afoot, and so await the sun.

Once again, our sceptred isle has been paralysed by a modest, and long-expected, fall of snow: a couple of inches of the blessed stuff and we’re back in the Middle Ages. It’s wearisome, frankly. Stay safe and warm, everybody. N.

Alone behind his ancient walls, he waits.
The candles burn low; in the roof-vaults, vast
Foreboding shadows grow. The die is cast:

He made his choice. Now his and others’ fates
Hang by a thread, and hope is fading fast.
Alone behind his ancient walls, he waits.

No welcome hail or hoofbeats at his gates;
Word will not come, for night is almost past.
This scarlet dawn, he knows, will be his last.
Alone behind his ancient walls, he waits.

Another Chaucerian rondel, with (I hope) a suitably medieval feel. N.

And so, the time for sleep rolls round at last:
The day done, all complete. Come, friendly Night –
Let hearts find rest, and day-bound dreams take flight.

It’s late. The midnight hour’s already passed.
Lay books and pen aside, put out the light.
And so, the time for sleep rolls round at last.

Days seem unending, yet they fly too fast.
In silent stillness we may find respite.
No more to say now, no words left to write.
And so, the time for sleep rolls round at last.

Yet another venerable and hitherto-untried form – the Chaucerian rondel (I kid you not): just the two rhymes, plus a refrain line (A), giving a rhyme scheme Abb abA abbA. Simple, but fun. N.

December. Winter’s milk-teeth gently clench
On feet and fingers. Cloud battalions march
Before the easterly, and in the ditch,
A fortnight’s rain gleams gunmetal. On such
A day, I take the road again in search
Of reason and revival, when I catch
A corner-of-my-eye glimpse: on a branch,
My own memento vivere – a patch
Of rose-pink on the hedgerow’s rags; a peach
Hung on a hawthorn twig, bright as a torch
To light me home again. At my approach
He bursts, grey, white and sunset, from his perch
And vanishes. No time allowed to watch
But just enough to lift the heart, bewitch
And make me smile, as usual, at his rich
Defiant colour that seems to reproach
All weariness, dark thought and sombre speech.
Life’s canvas begs no shadowed skull to preach
The need to seize the day; a little touch
Of humble magic conjured thus can reach
Into our hearts and days, and say as much.

Many things catch my eye when I’m out and about on the bike, but one sight that never fails to cheer me is a bullfinch – especially in winter, when the male’s vivid pink plumage positively glows against the grey of the hedgerows. Having never managed to photograph him, I’ve been meaning to write about him for ages, and here he is at last. I think of his splash of colour in the drab countryside as the opposite of the memento mori lurking in the background in old paintings – a reminder of life that does me good every time it see it. N.

More from our festive sojourn in west Wales, and another form I’d not tried before – the rondelet. Like the triolet, it has a refrain line (A), which in this case appears three times and is written in iambic dimeter; the rest is in iambic tetrameter. The rhyme scheme is AbAabbA.

Having played around with it a bit, I must say I like its straightforwardness and economy. It has a rather ‘naïve art’ feel to it, so I chose simple subjects, which ended up telling an equally uncomplicated story, partly inspired by some memorably weather-beaten walks in the country around my mother-in-law’s house.

As well as the red kite, the wolf, extinct in this islands for almost three centuries, emerged unlooked-for as a recurring theme (can’t quite bring myself to use the term ‘motif’) while we were away. It may have something to do with my reading over the last few weeks, which has consisted largely of the Norse legends and Icelandic sagas! He’ll be back again soon, I’m sure. N.

I’m lost. I had not planned to come this way.
Heart gripped in Fear’s chill hand
For there are, I understand
Dragons living in this land.

An island in a sea of rain-raked grass
Where kites wheel watchfully.
Thick-walled, four-square sanctuary
With food, fire and family.

Two circles, dug deep, high on this bleak hill.
Walled with stone, roofed with sky.
Where we watch the red kites fly,
Armed men stood once, doomed to die.

The red kite, wind-borne, keeps his lone watch while
The frozen forest sleeps:
In the hearth a bright fire leaps;
Round the house, Midwinter creeps.

The englyn is new to me, but it is, of course, a very ancient form: part of the Welsh bardic tradition, englyns are still regularly recited at Eisteddfod. Like the Japanese haiku, the englyn is based on syllable count – 10 in the first line, then six, seven and seven – with the added twist that the sixth syllable of the first line introduces the end-rhyme for the following three lines. Confused? I was.

Anyway, we were staying with my wife’s family in west Wales over Christmas, so it seemed the ideal opportunity to blend medium and material. The second poem in this sequence is about my mother-in-law’s house, while the third was inspired by the Iron Age fort on the hill above it. No apologies for the repeated red kite references: having once been hunted virtually to extinction, they’re now as common as sparrows in those parts. And very beautiful they are, too. Happy New Year to one and all. N.