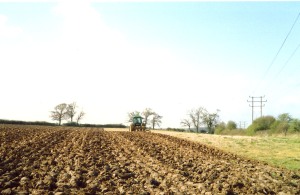 I ride along this lonely lane
With eager eyes and ears that strain
To hear those well-loved sounds again:

The diesel’s drone, the seagulls’ cry –
The noises-off that signify
Spring fieldwork’s under way close by.

The John Deere drives four furrows through
The stubborn clay. I wonder who
Would stop to watch the work I do?

This one came to me, more-or-less fully-formed, on Tuesday’s bike ride: three tercets of iambic tetrameter, for those of a prosodical turn of mind. If I might crave your indulgence, it works best read aloud.

The finest, and probably most famous, example of this form is The Eagle, by Alfred, Lord Tennyson – a masterclass in conciseness (he needed only two tercets!) and deceptively simple language.

The image is an old one (so old I had to scan it from a print…) of my good friend Ebenezer driving a John Deere, with a four-furrow plough, near the village where I used to live. The tractor I actually heard on Tuesday was a Massey-Ferguson smashing up clods with a power-harrow. As well as being far less romantic, it neithers scans nor alliterates nearly so well – plus, it was too far from the road to photograph properly. This is why they invented poetic licence. N.

This site uses Akismet to reduce spam. Learn how your comment data is processed.